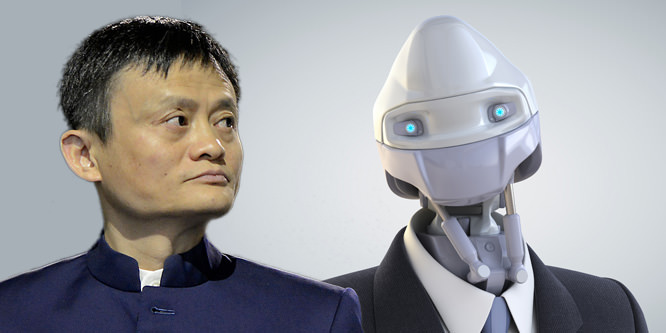 If the US has so far the upper hand in the AI race, namely thanks to its proactive private sector and its Digital Giants, China has the potential to become the next global AI leader as of 2025-2030. The Middle Kingdom definitely holds a set of valuable strategic advantages. But, what does it take to become the global AI No. 1?

The key element when it comes to develop AI technologies is data, more precisely Big data. Indeed, it must be borne in mind that AI and its sub branches (Machine Learning, Deep Learning, Neural Networks), are all algorithm based. These algorithms need a massive amount of data (Big Data) to produce desired results and to find trends, patterns and predictions.

It is often argued that China holds more data than US due to its huge population which is in fact four times larger than the US’s and with 802 million Chinese Internet users, Chinese companies can certainly build up on a vast amount of data to « train », develop and refine their AI technologies [1]. However, China’s advantage regarding its large set of data must be weighed against the number of data collected by American companies overseas. Global players, such as Facebook, Google or IBM established all around the world have access to far more data than the sole data generated on the American soil.

That being said, China holds certainly here its key competitive advantage, as the number of data within its reach is superior to both US and Europe’s data combined. Besides China can lean on the homogeneity and proximity of this raw material as well as the fairly loose regulations  surrounding their collect and use. Chinese regulations which are certainly detrimental to domestic’s liberties, give public and private agencies easier access to data and thereby a comparative advantage over western tech companies whose data-usage practices have been increasingly scrutinised. This applies especially to Europe since the coming into force of the GDPR, a very demanding regulation to companies having business in EU which might in the long run thwart EU’s ambitions in becoming an AI superpower. In a word, and it is unfortunate, more the governments and companies will be able to collect data on every citizen better their AI technology will be — Beijing well knows that…

Big data is vital to the development of AI technologies such as Machine Learning. This, implies the creation of local monopolies and at a global scale the emergence of an oligopolistic market. Indeed, a strong AI technology can only rely on digital giants having the ability to gather a huge amount of data. If the US’ AI development heavily lean on its tech champions, the GAFAMI (Google, Apple, Facebook, Amazon, Microsoft, IBM), China can pride itself on having its own web giants, the BHATX (Baidu, Huawei, Alibaba, Tencent and Xiaomi) which are quickly catching up with their American counterparts and are now positioning themselves to become global leaders in various AI-related sectors, e.g. smart city solutions, autonomous driving, conversational AI, and predictive healthcare [2].

Chinese digital giants are now aggressively investing in AI in view of increasing their international reach. For instance, Alibaba has late 2017 poured $15 billion into an overseas AI research drive, allowing itself to play in the big leagues [3] as Amazon invested the same year a somewhat equivalent sum of $16,1 billion [4].

In July 2017, China’s State Council issued the New Generation AI Development Plan with an annual budget of about 22 billion, with the aim to reach approximately 60 billion per year by 2025 [5]. Notably, Beijing’s commitment to funding R&D in the AI sector has been growing sharply, up 200 percent from 2000 to 2015 [6]. Besides, the recent AI‘s inclusion in the Belt and Road Initiative (BRI) with the launching in 2016 of the Digital Belt and Road Program, (DBAR) is a clear expression of China’s determination in becoming the global AI No. 1. The  Digital Silk Road aims to help the Middle Kingdom to promote the construction of AI cooperation bases and joint research centres while accelerating the broad application of AI technologies in countries along the “One Belt, One Road”[7].

The political willness and support is strong as Xi Jinping is counting on Chinese technological advances to ensure that China overtakes the US as the world’s leading superpower by 2050.

In this respect, China differs from the US, the Uncle Sam keeping the leadership only thanks to a robust private sector. Indeed, Trump hasn’t made the AI one of its priorities and the amount of public funds invested in this field is now stagnating. The US President prefers to support traditional industries including the manufacturing and mining sectors rather than dotcoms. As the result of this lack of a strong political guidance and strategy, the American National Science Foundation’s (NSF) Director said in a statement that if current trends continue, he expects “China to pass the United States in AI’s R&D investments” by the end of 2018 [8].

What is still missing China to bridge the gap with the US?

China’s AI talent pool is weak. Indeed, in spite of a vast number of graduates in sciences, engineering and mathematics, Beijing can count only on a limited amount of AI specialists. According to China’s AI Development Report 2018 released by the Tsinghua University by the end of 2017 China was home to 18,232 AI talents accounting for 8,9 % of the world’s total talent, well behind the US (13,9 %). Besides, the same report pointed out the country’s shortage of top-level AI researchers, the People’s Republic counting fewer than 1,000 experts [9].

To solve this issue the State Council’s launched an extensive 5 years plan outlining a two-pronged “gathering” and “training” approach. On a domestic level 500 professors and 5,000 students will be trained in the best universities, while China’s tech giants have set up their own overseas AI institutes to recruit foreign talent [10].

Despite major efforts and considerable subsidies, China remains dependent to the US for the development of microchips, key element of the Machine Learning technologies. Indeed, if China is currently the world’s biggest chip market, consuming nearly 60% of global semiconductor sales, only 10% of those $190 billion of chips are produced on the Chinese territory [11]. An issue Alibaba will attempt to address in launching its first self-developed AI inference chip in the second half of 2019 [12]. China may not be No. 1 yet, however there is little doubt that the Middle Kingdom has the means to achieve its ambition perhaps even sooner than we think.

“Damien Sabathié is a French IP/IT lawyer living in Munich. Damien studied law in Paris, Budapest, Maastricht and Strasbourg where he obtained his two Master of Laws degrees from the Center for international Intellectual Property Studies (CEIPI). He has a special interest in the technologies’ impact on geopolitics”.

[12] E. Jiang, “Alibaba is reportedly setting up its own company to make a customised artificial-intelligence chip”, Business Insider Australia, September 20, 2018.